There is an access agreement in place and you are able to park in the farm lane at the Glen Lough campsite, you’ll find the keeill over the hedge in the trees in the left.  Cabbal Druiaght is also one of the best preserved of the keeills, a hidden gem.

Both Nicola and I had passed by this keeill on a number of occasions, it is just tucked in at the entrance to a busy farm and campsite in Glen Vine and I wonder how many people pass by it each year and don’t even know it’s there.  Although it is right next to the farm lane, it is surprisingly secluded and hidden away.  Cabbal Druiaght has no known dedication to any Saint, however, I found this information in ‘Manx Place Names’ (J. J. Kneen, 1925):

‘As it stands, the name means ‘the druids’ chapel,’and in that case it is probably a modern name : If an old name the second element may be a metathetic form of Duthracht [ ] the name of an Irish saint. The Martyrology of Donegal says : ‘Duthracht of Liathdruim, son of Trichim, of Sabhall, who is of the race of Fiatach Finn. monarch of Erin.’

The Keeill is in good order and is one of the most complete examples remaining, it has been fenced by and is in the protection of the Manx Museum and this has obviously kept it from damage over recent times.   In an article from the Ramsey Courier entitled ‘Braddan and Marown Antiquarian Excursions’ from 1959 (found in the Newspapers section at www.imuseum.im), it mentions that the Keeill still contains the roughly shaped font and holy-water stoup.  We couldn’t see anything that looked like a font, however, the grass is quite high and it may well be in the undergrowth or overturned.

Cabbal Druiacht was surveyed by The Manx Archeological Survey for their first report in 1908/09.  Their job was to ‘to make inquiry as to the number and position of all the historic and pre-historic remains in the Isle of Man, to conduct a careful and systematic examination of such remains, and to draw up a full and particular Report thereon’.  A number of the keeills have deteriorated since that time and often the survey is invaluable in explaining what was once there, we have a lot to be grateful to P. M. C. Kermode for as a nation.

At the time of the survey, the keeill was found to measure 13ft. 6in. by 8ft. 6in. with the doorway sitting in the middle of the west wall and measuring 17in. wide and 12in. outside, there were two steps in to the entrance of the keeill.  A number of the jambs remained for the door and of a window in the south end, although the sill of the window hadn’t survived.  There were also about 230 of the white shore pebbles that are familiar to these sacred sites found inside the building.

The base of the altar was still in situ and measured 4ft. by 2ft. 6in. with a height of about 10in., the upright stones were still visible forming pillars at the corners of a centre formed of slabs, these are still obvious in 2016.  At the foot of the altar a step was formed with a long narrow stone together with an inner one set on edge.  Above the altar they found traces of a window at the same level as the one in the south wall, the light would have been very effective in these small dark buildings. 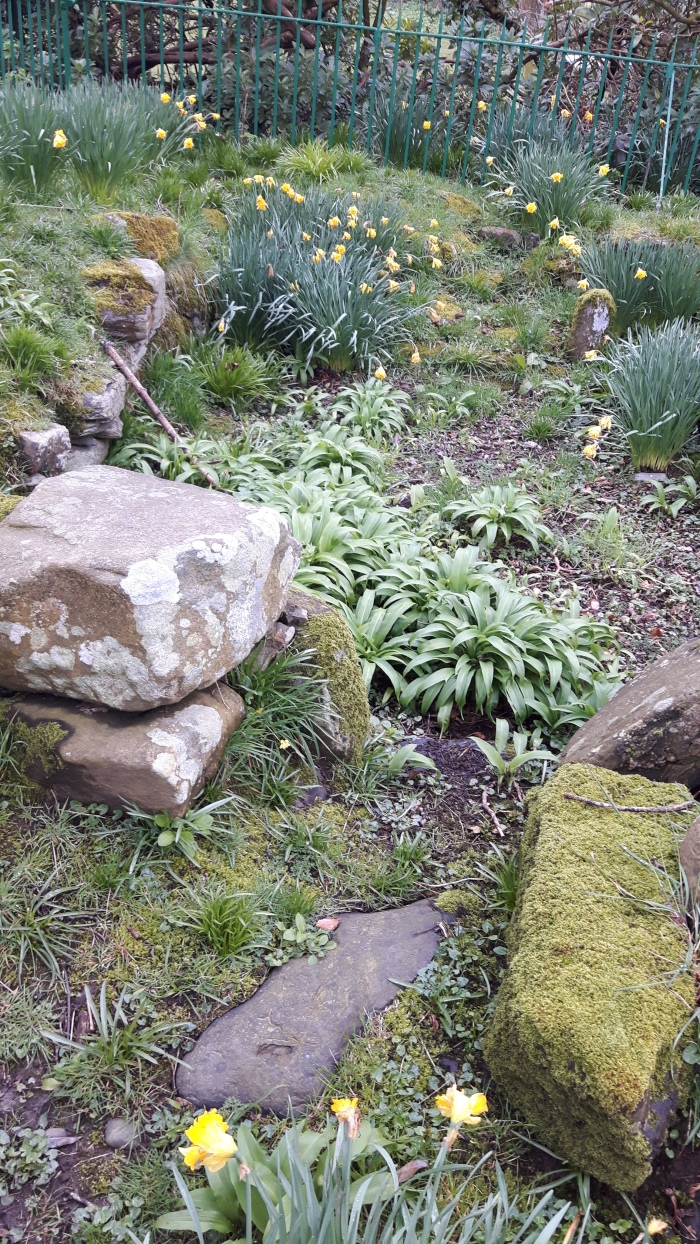 The walls at the time were between 2 and 3ft., I would think they would be around 2ft. high at the time of our visit.  They were built from ‘unhewn stone’and three large foundation stones made from granite crossed the full length of the gable in the east wall.  A single stone almost 5ft. long and 8in. wide stood on edge all the way from the door to the north west corner and all the walls were surrounded by a bank about 3ft. wide at the base.  A number of areas of floor paving remained and formed a path from the door to the altar, wonderful to see that existing so late on, it wasn’t visible at the time of our visit but most likely they were still there beneath the undergrowth.  Unfortunately, over time a thorn tree had pushed forward the south west corner and caused damage.

The enclosure was roughly circular and measured about 27 yards across with the keeill sitting in the north east part.  The site of the keeill had been artificially raised and was surrounded by the remains of a bank of earth and stone between 8 to 10ft. wide., lintel graves had at one time been found about 15 yards from the north west corner of the keeill which indicates the original size of the cemetery had been much larger.

Next time you’re driving from Union Mills to Glen Vine, stop in at this sacred place, you’re able to park in the drive way and you’ll find it on the left.  It is definitely worth a visit.

Find out more about keeills.