Skyhill is the modern spelling of Scacafel which is Norse for wooded hill.  This hill near Ramsey was the scene of one of the most famous battles in Manx history where Godred Croven fought the Manx men and took a victory in 1079 that made him Ruler of Man and the Western Isles.  It is hard to be exactly sure of when the keeills date from but it is thought that they were built between 600AD and 1200 AD,  I couldn’t help but wonder if there was a hermit living in the keeill at the time of the battle.

If only the stones could tell stories.

Skyhill and the surrounding areas have played an important part in the history of the Island, in George Quayle’s wonderful book, ‘Legends of a Lifetime’, he talks of the people who lived in the hills around there as if they were a different, much hardier breed, he thought they were:

‘For the most part, a deeply religious people.  To quote the Ettrick shepherd, “a people who saw God in the clouds.”… they were a people of fine physique, their environment saw to this address it required fully developed lungs and stout hearts to wrest a living from these steep and rugged slopes.’

He wasn’t the only one, the Manx poet, T. E. Brown describes them in a similar way in his poem ‘Kitty of the Sherragh Vane’:

“…for the air is thin
And fine up there, and they sucks it in
Very strong,
Very long,
And mixes it with the mould
Of all their body and all their sowl.”

For a hermit over 1000 years ago, the lifestyle was probably a lonely and uncomfortable one, the Keeill Bow site is very exposed with little shelter as you can see from the windswept trees.  If the intention was to isolate yourself so that your life could be concentrated on a simple existence and feeling closer to God then Skyhill was a pretty good choice of location.  A ‘thin’ place, a ‘thin’ living.

The keeill and surrounding burial ground sits in a field known as ‘Magher ny Hoarn’ meaning ‘field of the graves’ and has been newly fenced by the Manx Museum and National Trust as it is in their guardianship, I found a mention of it in a letter from C. Radcliffe, published in the ‘Manks Advertiser’ in 1826, lamenting the state of the Island’s ecclesiastical antiquities.  In the letter, Radcliffe says;

On the top of Sky-Hill are the remains of Keeill Bow.  From the formation of the word, I should suppose Bow to be the name of some saint Manksified, – but whether St. Buan, or some other, it is impossible to say.

I have found no other mention of this name associated with the keeill but we can assume that was its common name at the start of the nineteenth century so I have decided to use it in this post.

The keeill is quite small measuring only 15ft x 7ft and not so much is visible above ground except for the large stones at the entrance way.  We could see the remains of the lintel grave that was mentioned in the archaeological survey. 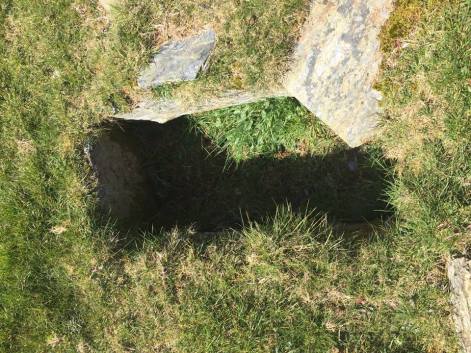 The Keeill and burial ground were surveyed as part of the Fourth Report of the Manx Archaeological Survey in around 1915.  A read of the survey really helps with understanding the site as it is visually quite confusing.  They found the keeill sitting inside a pear shaped cemetery measuring 23 by 16 yards to the outside embankment which was 6ft. wide at the base.  An entrance at the south is marked by upright stone and a step between them, a path leads from here to the keeill entrance.  There is a similar entrance at the north end of the enclosure also paved with large slabs, another pave leads diagonally from the east side to the centre of the cemetery.  There was a grave found in the centre but nothing was found inside, the grave is marked on the map below and we were able to see it in 2016 (see earlier photo).

At the time of the Kermode survey, the lines of the walls of the keeill were visible although with only two or three courses remaining, it measured 15 by 7ft. and the door was in the south wall.  The original jamb stones in the doorway remained and the base of the altar had survived as two heavy slabs lying on the ground at the east end.  The usual bank of stone and earth against the wall was still visible in places.

A enjoyable walk up Skyhill in the sunshine, a couple of homemade scones and the wonderful views made this visit a very pleasant one. 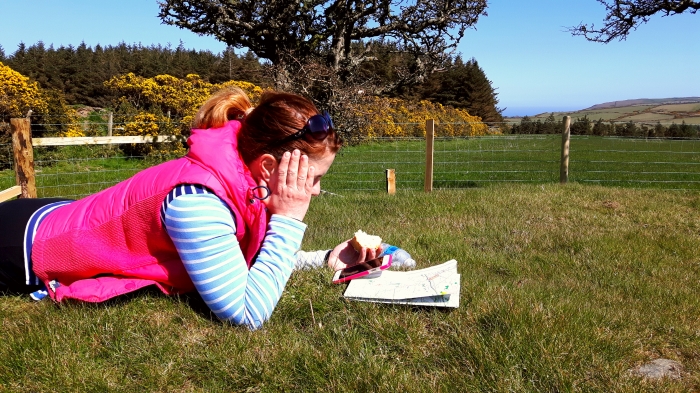 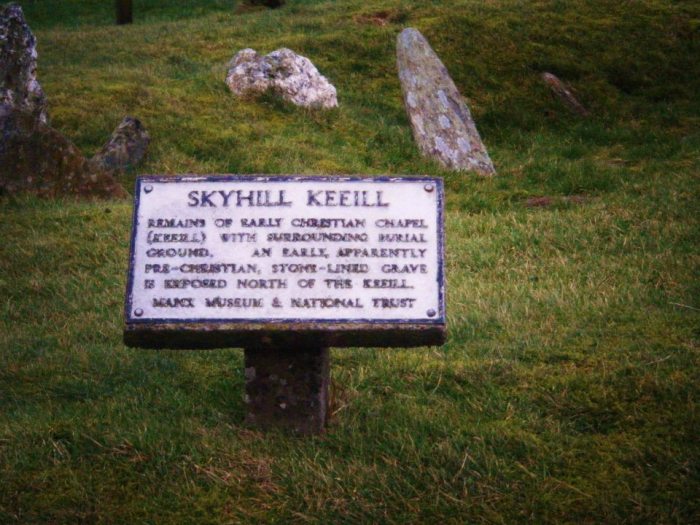 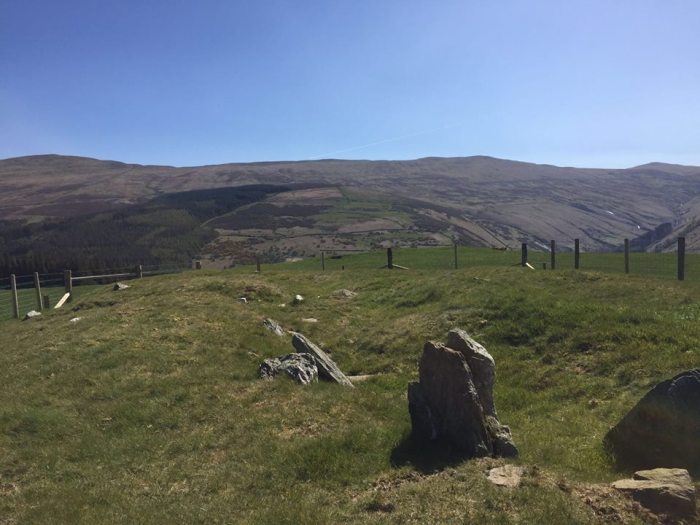 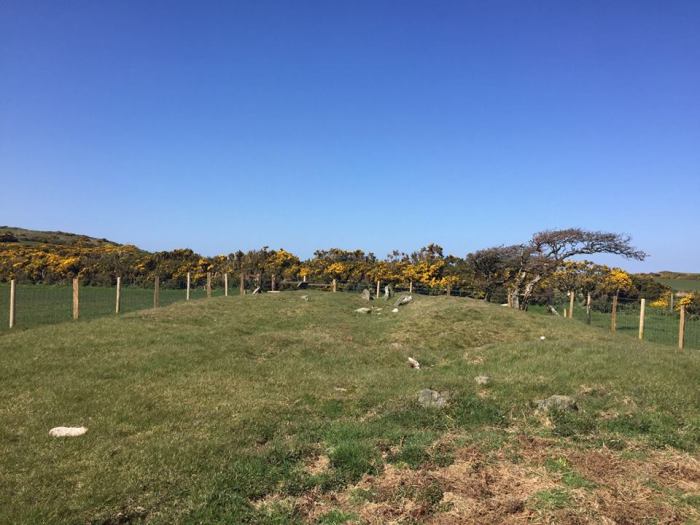 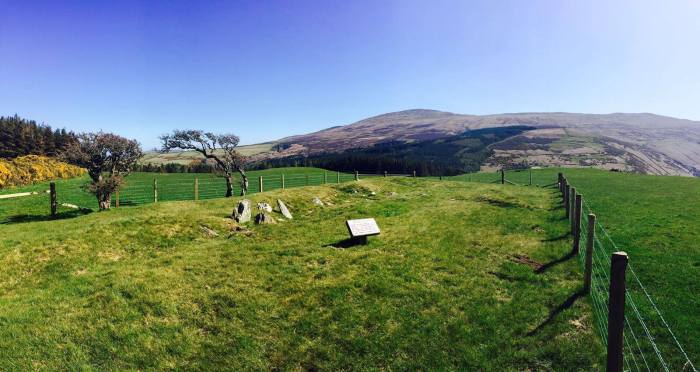 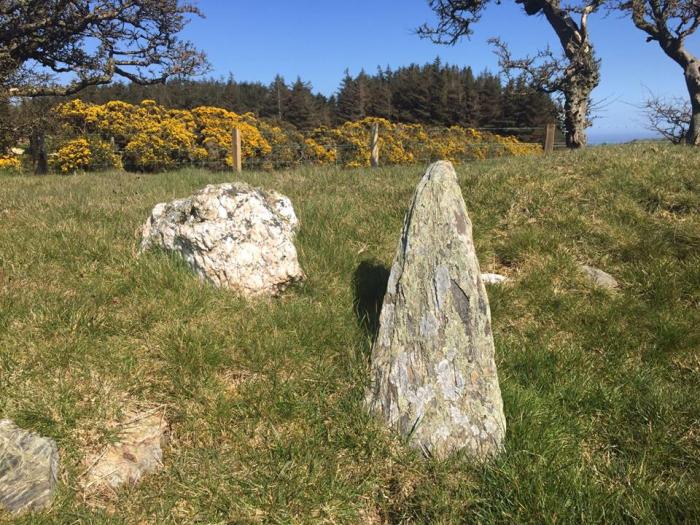 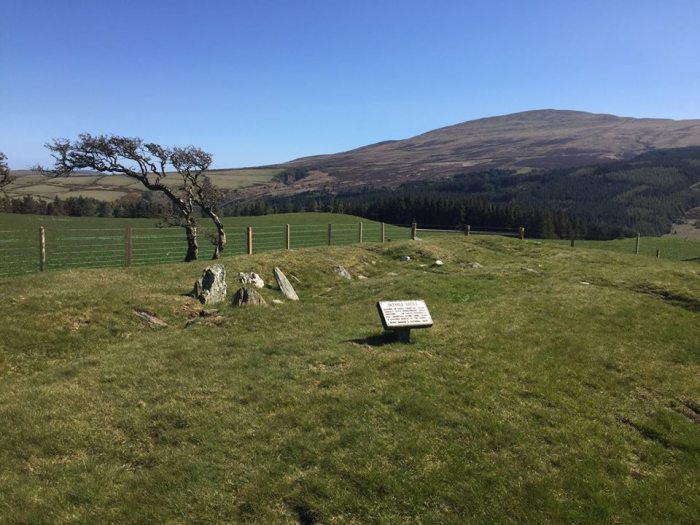 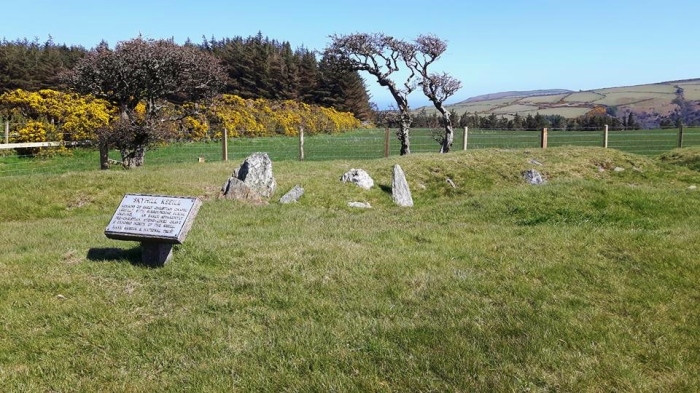