Cabbal Pherick is one of the better known Manx keeills, it is situated in Glen Mooar near Kirk Michael, next to the Island’s highest waterfall, ‘Spooyt Vane’ (meaning ‘White Spout’). 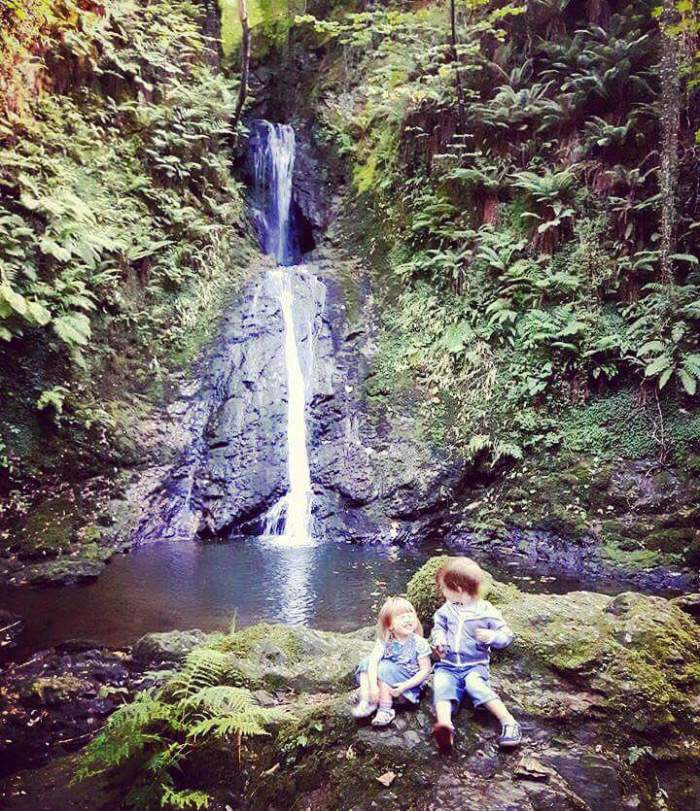 This early chapel is one of many dedicated to St. Patrick across the Island and is in a very lovely but lonely location in one of our Island Glens.

We visited when the sun was low in the sky and dappled sunlight made this holy place very beautiful in the early evening light.  In the background we could hear Spooyt Vane waterfall far below and it would have been very peaceful if it wasn’t for the two year old.  We had picked up some fish and chips in Peel on the way out and they were still hot when we had got to the keeill so we sat in this delightful spot and had our tea.  Keeills and Chips. 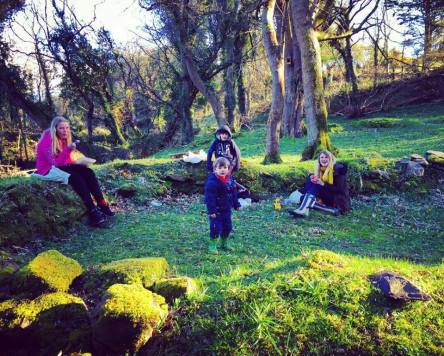 Cabbal Pherick sits in a clearing and is comparatively large, measuring 23ft by 13ft.  The walls still stand quite high in places but I think it has deteriorated slightly since it was surveyed in 1911 for the Third Report of the Manx Archaeological Survey. 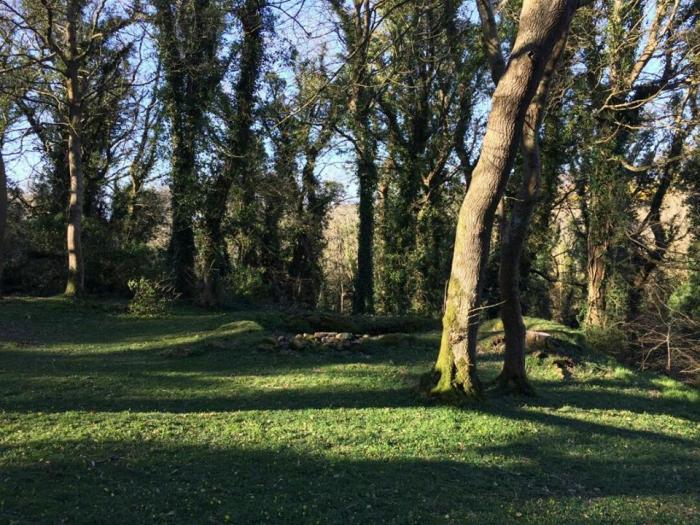 When it was surveyed, the altar stone was removed and placed to the right of the gate at Kirk Michael Parish Church.  The remains of the culdee’s ‘cell’ are still to be seen at the south west corner which makes it particularly unusual.  The plan showing both is from the survey:

I came across a slightly horrifying story about the last incumbent of the keeill and cell in the the Ramsey Courier, describing a visit to the keeill from the Antiquarian society in 1954 (www.imuseum.im): 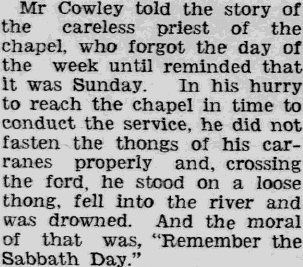 This story is also mentioned with more detail in the report for the survey team in 1911:

It is told of this Keeill that the last Priest who officiated in it was guilty of mending his carranes on a Sunday, and in consequence, met with a sudden and dreadful end. The story as told by the late Mr. Cannell was as follows: “The priest of Cabbal Pherick, at the Spooyt Vane, was a cobbler to his trade. One day he was so busy mending a pair of shoes that he did not notice the people passing in the road and looking at him in surprise. His housekeeper came to him at last and said ‘Are you not ashamed to be doing work on the Sabbath and all the people waiting at the Chapel for you.’ What are thou talking of woman,’ he said, ‘Go and count the eggs and see how many are in the nest.’ For the priest had a hen which laid an egg every day and they were collected only once a week, and that is how he knew what day it would be. So the woman went, and when she came back she said-Seven eggs there are.’ Then the priest threw down his tools, and rushed away with such haste that he fell down the Spooyt Vane, and was drowned. And the people never used the Chapel any more.” Another version lays stress on the fact that he waxed his shoe-laces, and when he was crossing the stream he tripped ever them and was carried down the fall !

I’m not sure whether the story was ever based on fact but I’m sure it was a great teaching tool for the people living nearby on the importance of keeping the Sabbath!

The photo below of Cabbal Pherick being excavated was taken from the report of the Third Report of the Manx Archaeological Survey in 1911, the photo itself was taken by Mr W. Skillicorn.  As you can see from the slightly chaotic look of the pile of stones in the middle of the keeill, I don’t think the excavations were carried out quite as carefully as they would have been today! I was told that local men were brought in to do the majority of the digging and it was overseen by Mr Kermode and the other members of the team, a rough and ready way of working. 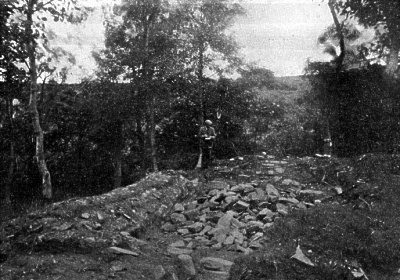 They found the doorway to be 25 in. wide and situated in the west wall, there was a 12in. high step leading in to the keeill from the outside.  Several pavement stones were in position at the east end and parts of the altar remained, the bed of a window on the east wall was still visible although the sill and jamb stones had gone.

The walls were the usual inner and outer face of stones, set without mortar and the space filled with soil and rubble.  P. M. C. Kermode found a small flat stone lying on its face by the doorway, on it was a very simple linear cross, a simple mark for the simple Celtic faith, this little cross is now in the ownership of the Manx Museum.  The enclosure measuring about 32 yards north to south and 25 yards east to west, was surrounded by a low embankment of earth and stones between 4 and 6ft. wide.

Go out there, experience this peaceful place and think of over 1000 years of history at this site.  Think of the many Victorian tourists that passed on their way to visit Spooyt Vane, think of the many families that came here to share important times in their lives when it was in use as a place of God, think of the many people who have visited here over the years to reflect on their lives and enjoy the solitary beauty of this place.  Don’t think about the poor hermit with his slippery shoes, that’ll only ruin it!

And bring a picnic, or at least cake. 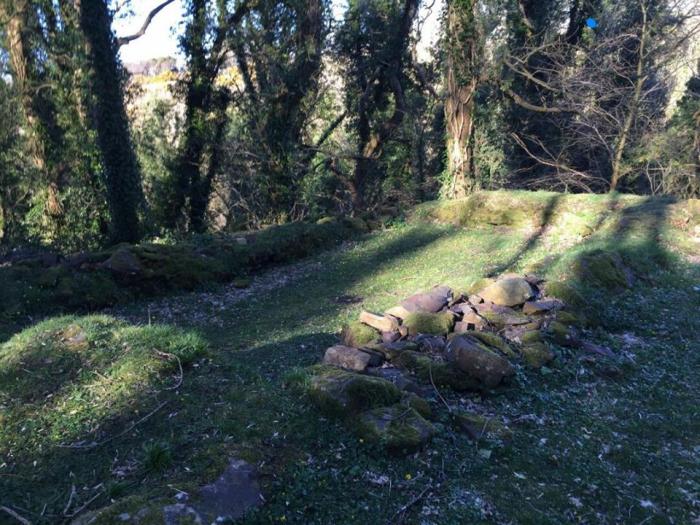 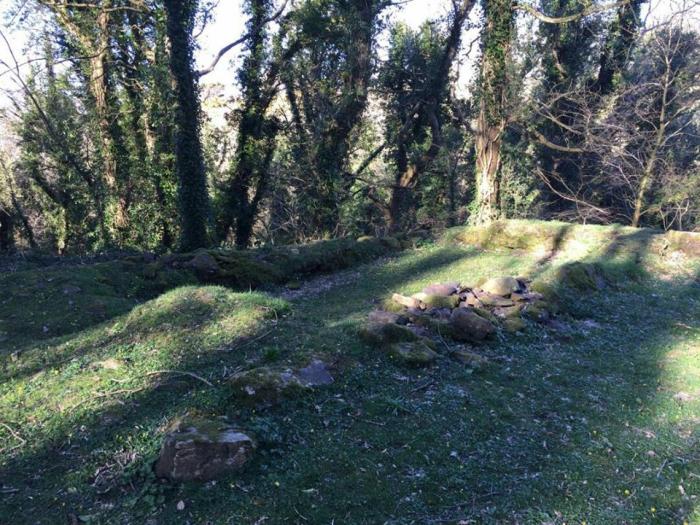 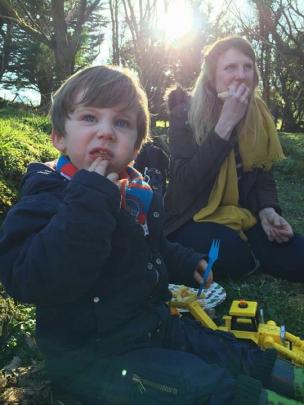 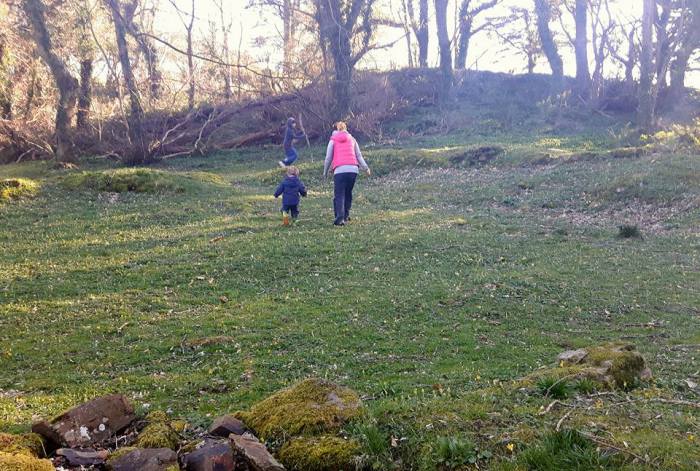