This quiet spot high above Tholt y Will is a favourite of Nicola’s as her family, the Christians and the Mylecharaines, farmed here for generations.  The area is steeped in history and there are two very interesting tholtans (ruined buildings) on the site, ‘The Creggans’ and ‘The Corrody’.

The name ‘Corrody’ was originally from ‘Corrony’, a corruption of ‘Ciaran’ an early Christian saint, it is possible that St. Ciaran was the dedication for the keeill.  This is suggested in an article in the Mona’s Herald on a visit to the site by the Antiquarian Society in 1953 (www.imuseum.im):

The name of Mylecharaine comes from the Irish Gaelic meaning ‘Mac Giolla Ciardin’ – son of Ciaran’s servant (‘The Place-Names of the Isle of Man With their Origin and History’ by J.J. Kneen, 1925), this means Nicola’s family may have a much longer association with the area than she originally thought!

At one time this area was full of hill farms and would have been a large community.  It is hard to imagine that now, as in the 21st century The Corrody seems very isolated.  If you sit at the keeill and look across the valley, you can see many ruined farmsteads all sitting at around the same height.

From the 1820’s onwards there was mass emigration from the Island, especially the north, life was hard and after the enclosure of the common land in the 1860’s there continued to be large numbers of people leaving the Island up until the early 20th century.  This article from the ‘Manx Sun’ written in 1852 (www.imuseum.im) gives a very touching description of those leaving who knew they may never see the land of their birth again:

Emigration – The natives of the northern part of the Island are again making arrangements to leave the place of their birth and seek a home in North America. On Wednesday last about fifty persons, principally young men arrived in Douglas from Andreas, Ballaugh etc. and the same night took their departure by the King Orry for Liverpool with the intention of emigrating to America where the most of them have already friends or relatives. We are informed by a person who accompanied the emigrants to Douglas that the scene when these parties were leaving their homes, was truly affecting. Their relatives followed them for a considerable way on the road, lamenting their departure whilst a long procession of carts conveying the luggage moved slowly along and also bearing the juvenile portion of the party amidst the silence of those about to leave their native soil, who would occasionally steal an expressive glance at their late homes. Our informant says that he never saw even a funeral procession move with more touching solemnity. There were also a few individuals from the South of the Island who left by the same steamship en route for Australia.

As someone who volunteers at the Isle of Man Family History Society Library helping people with their genealogy research, I am often amazed by the real affinity to the Island that people feel whose ancestors left the Island almost 200 years earlier.  I think often about how much these economic migrants must have loved and missed their Island home, to have passed this strong feeling on to so many future generations.

The stories of mass emigration from the north of the Island and the remaining farmsteads could fill a blog on their own.

The Corrody keeill lies in a field known as ‘Cronk y Keeillee’ which translates as ‘hill of the keeill’, and seems to have been built on the remains of a Bronze Age burial site, the structure of which is still visible surrounding it.  The foundations of the keeill are still visible and in about the same condition as it was described a century ago, there is a holy well in the next field that is known as Chibbyr Karrin (Ciaran’s Well) 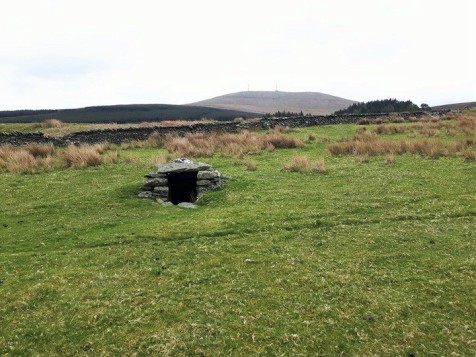 The keeill was surveyed around 1915 for the Fourth Report of the Manx Archaeological Survey, they found that:

The Keeill had been set on a low and partly artificial mound, now two feet above the level of the field, roughly circular but here and there encroached upon by the plough, and having an inside diameter of about thirteen yards; surrounded by stones set on end with remains of an outer circle of stones at 3 to 6 ft. from the other. The largest of these stones was at the E. end and measured thirty two inches high above the surface of the ground by 22 to 24 inches. The general appearance suggested a pre-historic burial-place, and the cinerary urn now found proved it to have been used as such in the Bronze Age before it became a Christian Cemetery.

The plans below are taken from the survey and show the keeill in relation to the Bronze Age remains followed by a plan of the keeill itself as they found it:

The keeill, when surveyed was 17 ft. 6 ins. by 9 ft. and ran N.W and S.E, the walls were between 24 and 40 inches high and between 3 and 4 foot thick.  The doorway was in the north wall and there were some ‘jamb stones’ remaining for openings in the walls – probably windows.  Only one or two paving slabs remained and the was no sign of an altar, there was some stone skirting along the lower courses of the walls.  There was surprisingly little information.

The photograph below is taken from the survey and shows the stone skirting in more detail:

There are some wonderful recollections of life and folklore at ‘The Corrody’ by Alfred Christian (Nicola’s great grandfather) that were collected for the Manx Folk Life Survey in the mid twentieth century.  These documents are available at the Manx Museum Library and well worth a look, they are absolutely fascinating.  This keeill is well worth a visit as a good example with a great view, I can also highly recommend the cake at Tholt y Will tea rooms just down the road!

I’ll finish this with the most lovely poem by one of my favourites, ‘Cushag’, Josephine Kermode, who was the sister of P. M .C Kermode (Manx Museum and National Trust) and who was known with fondness as the best loved poet of her generation:

LONE little tholtan, left by the wayside,
Where have they wandered that loved thee of old?
Where are the children that played by the fireside?
Poor little chiollagh, forlorn and cold!

Mutely thy gables are standing asunder,
Rafterless, ragged, the ruin between!
All that was homelike, secluded and tender,
Stripped of its sheltering thatch is seen.

Why have they left thee so drear and forsaken,
Was it misfortune, or sadder unthrift?
Was there a stone of the Church in thy building
Secretly working to send them adrift?

Was it the dream of a new Eldorado
Lured them away with its roseate hue?
Only to find the green hills of the distance
Bare as Barooil to the nearer view.

Come winds of Autumn and cover it gently,
Poor little hearth-stone deserted and bare;
Cover it softly with leaves from the woodlands,
Lap it away from the cold bleak air.

Hasten the day when those desolate gables,
Holding their secret of failure and dearth,
Gently shall sink to their grave by the wayside,
Hidden at last in the warm kind earth. 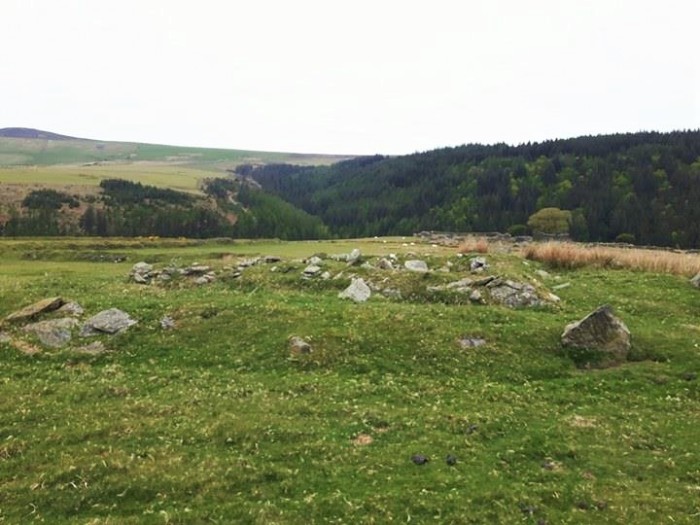 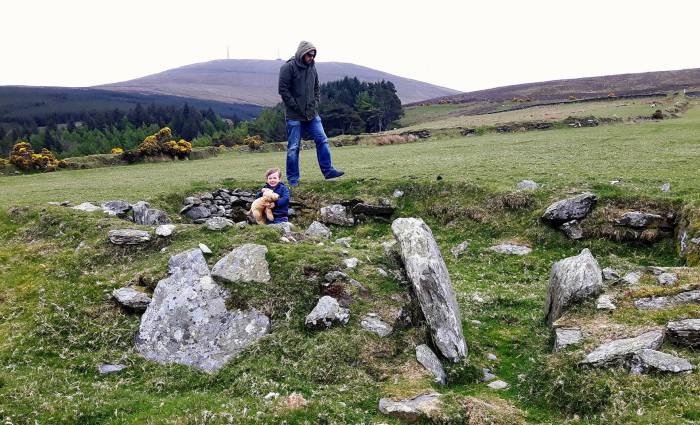 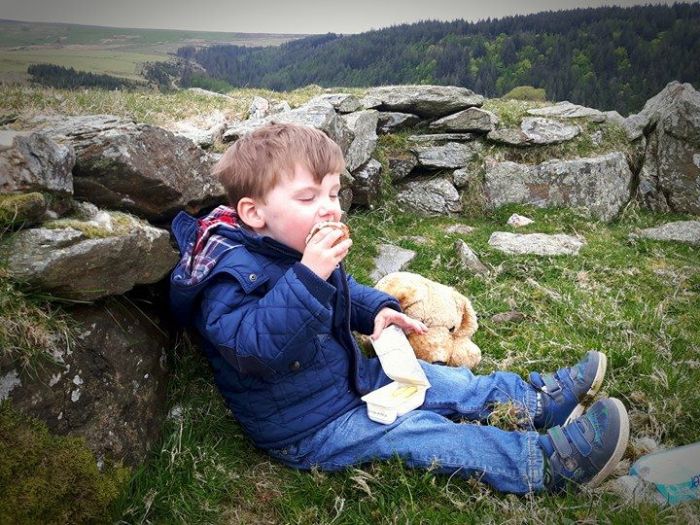 You may have noticed that in many blog posts, I have used information from the Isle of Man Natural History and Antiquarian Society visits and journals, the society is still going strong with lots of interesting talks and visits, you can find out more at http://manxantiquarians.com/.