With kind permission of Mr and Mrs Teare.

Cabbal ny Cooilley (Chapel of the Nook) sits between two farms and is not easily accessible making it probably one of the least visited chapels.  We were looking forward to visiting it as it is one of the few remaining antiquities in the Parish of Bride and the only surviving keeill.

In a letter written to the ‘Manks Advertiser’ in 1826 by a Mr C. Radcliffe, he draws attention to the many keeills that still remained at the time and their plight, he described some of the sites that he remembered himself and appealed to his fellow countrymen to make a complete list of the remaining antiquities but his appeal fell on deaf ears.  He mentions that:

‘In Kirk Bride there is an estate called Ballakeeillmean, from Keeill Mean, probably St. Matthew ; in Manks : and Keeill Vael, in the same parish, if I remember right, dedicated either to Michael the Archangel, or St. Mael or Mel, one of the disciples of St. Patrick, by whom his life was written. Keeill Thraie, i.e., the Church of the Strand, from its situation near the sea-coast. Cabbal-ny-Guilcagh—whether the estate takes its name from the Chapel, or the Chapel from the estate, I cannot conjecture, and there is Keeill Thusjag, dedicated to St. Thusag from whose hands St. Patrick receieved the holy sacrament when on his dying bed…

I wish some of my countrymen, who have leisure, would be at the pains to make out an accurate list of the venerable ruins of these places where their ancestors offered unto God, through Christ, the sacrifice of prayer and praise. They are gone to their long home, and the very places where they worshipped the God that made them, and which are now so many heaps of ruins, should possess no common share of interest in the minds of that posterity.’

The Keeill Mean, dedicated to Matthew is likely to be Cabbal ny Cooilley as Ballacamaine probably comes from Ballakeeillmian (‘Place names of the Isle of Man’, J. J. Kneen).  These are extracts from the letter that can be found in the newspapers and periodicals section at www.imuseum.im.  There are many keeill sites mentioned that are long gone but because of this letter their memory remains, if only more people at the time had been as forward thinking as Mr. Radcliffe!

By the time of the Third Report of the Manx Archaeological Survey in 1911 there are five keeills (not the same five mentioned in the letter) noted as being in the parish of Bride:

The fifth keeill mentioned is Cabbal ny Cooilley, then on the land of Ballacamaine.  You can almost sense P. M. C. Kermode’s disappointment when you read that the landowner would not allow the site to be disturbed:

Ballacamain. This is marked on the O.S., III, 10, (1019). It lies about 700 yds. North-West of Ballachrink house and 700 yds. West of the highroad to Bride, at a height of too ft. or thereabouts. We regret that we were not allowed to examine it. From the appearance of the ground it seems doubtful if there is anything of the walls remaining, but we had hoped by excavating to have been able to judge the dimensions and possibly to have made a Plan. It is unfortunate that the superstition which prevents the orderly examination of some of these Keeills for the purpose of placing on record, for the information of those who come after us, such particulars as may still be gleaned of their character, structure and appearance, and of bringing to light any monuments buried in their ruins, has in no case availed to prevent their total ruin and subsequent destruction. These monuments and remains are all the evidence which has come down to us of the history of the people by whom they were erected, and of the conditions under which they lived, and even if the refusal to allow of their proper exploration were likely to preserve them, which it certainly is not, to keep them buried beneath the surface, and forbid their examination for the purpose of record, is as useless as to cart them away. We can only hope that in course of time, as the results of our work become better known, we may meet with more general support in this respect, and that a more active interest will be taken in the proper preservation of the little that does remain.

Although unfortunate for the survey team, there is a strong folklore of bad things happening to people who have interfered with the keeills and I can absolutely understand someone almost 110 years ago having second thoughts about it.

Mrs Teare, the current landowner, mentioned that her husband thought it may have been surveyed in the 1950’s and was very curious to find out more.  After looking in the museum library and speaking to Andrew Johnson (MNH), it seems there is no record of any survey having taken place and looking at the date, it is likely that it was the Ordnance Survey team mapping the site.

When we eventually found the keeill after originally searching in the wrong field (thanks to my incorrectly marking the map reference), we found a very large mound measuring around 50ft. in diameter and between 4 and 6ft. in height, there were two large stones on top, one standing up, one lying down. In the Third Manx Scrapbook (Gill, 1963), the larger stone is mentioned:

‘Cabbal ny Chooilley, “Chapel of the Rear Part,” is the local name for the ancient Keeill in the field called Creggan ny Chooilley on Ballakermeen.  “The big stone that the Ballakermeen man took away for a gatepost, but he got no sleep that night and put it back first thing next morning,” is pointed out on the mound of the chapel.’

Of course, as Gill rarely references anything, I’m not sure where he got that story from!

Although there was a little wear on the mound at one side, no other stonework was visible and we were unsure whether the keeill building had sat on top of this mound or was interred inside (similar to Keeill Pharick a Dromma).We sat on one of the stones with a cup of tea and ate some delicious banana cake that Nicola had made, we admired the view and wondered exactly what we were sitting on.

The lack of archaeological excavation means that it would seem that this site is still intact and a mystery, who knows what lies beneath!

Hopefully, one day someone will find out, know any archaeologists with time on their hands? 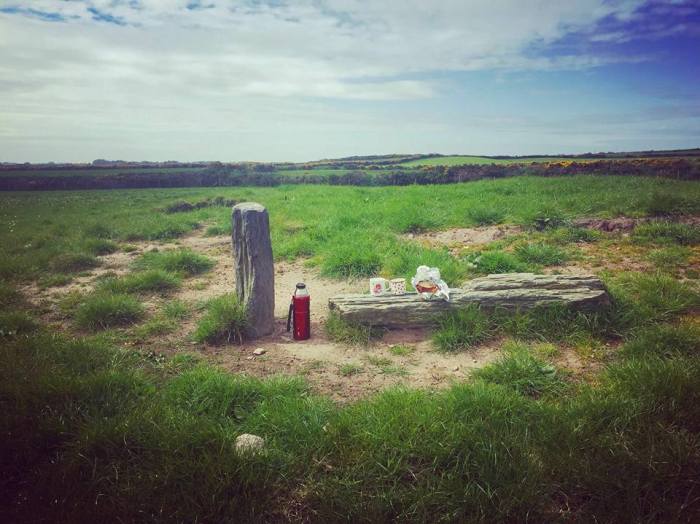 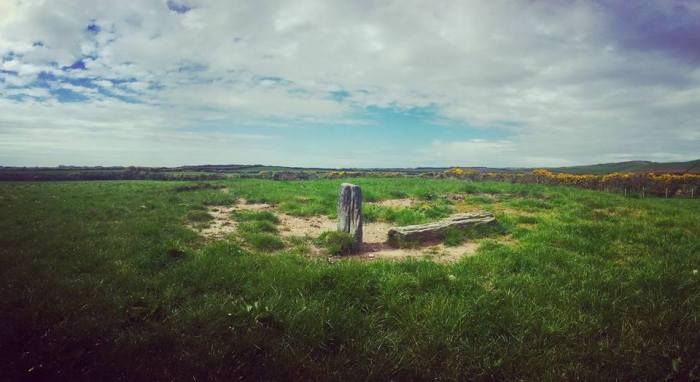